Contacts | About us | For agents |
Home Destinations Ukraine

Ukraine is situated in the south-eastern part of Central Europe and has its own territory, government, national emblem, flag and anthem. It borders on Russia, Byelorussia, Moldova, Slovakia, Roumania, Hungary and Poland on land and Russia, Georgia, Bulgaria, Roumania and Turkey on sea.

The territory of Ukraine is mostly a level, treeless plain, calls "steppe". There are the Crimean Mountains in the Crimean peninsula and the Carpathians in the west, but they are not very high. Mixed forests of pine and fir-trees, beeches, limes, oaks and elms cover the mountains, but the thickest woods can still be found in the northern part of the republic, in Volyn. Kiev and Cherkassy lie in the midst of Ukrainian southernmost pine forest. The main Ukrainian river is the Dnieper. It is one of the longest European rivers and one of the republic's main source of hydroelectric power. The Dnieper and its tributary the Ross had been the cradle of the Ukrainian and Russian people in time immemorial.

Kiev - the capital of Ukraine 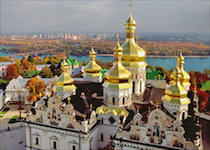