Book the tour this month with 15 % discount

of the price published here

In the morning we start our journey on the Golden Ring of ancient Russian towns. We first drive through scenic Russian landscapes to Vladimir, one of the ancient capitals of Russia. During the city sightseeing tour, we visit the St. Demetrius Cathedral and see the Assumption Cathedral, both world heritage sites, and the Golden Gate. In the late afternoon we continue to Suzdal and check-in at the Hotel Azimut Suzdal **** or similar.

Dating back almost thousand years, Suzdal is a small fairy-tale town with an unsurpassed collection of ancient Russian architecture. During the optional whole day tour, we discover all the treasures of Suzdal including the Kremlin, the Nativity Cathedral, the Museum of Wooden Architecture, St. Ethymius Monastery and the Transfiguration Cathedral.

In the morning we continue along the Golden Ring to Kostroma. Kostroma is located on both sides of the Volga River and the high banks offer impressive views of the Volga expanses. During the afternoon sightseeing tour, we see the city center with the well-preserved 18th and 19th-century merchant houses, the treasure of the town, the 13th cenrury Ipatiev Monastery with the Trnitiy Cathdral and we visit the beautiful Resurection Church. Check in at Hotel Azimut Kostroma*** or similar.

Today we continue to Yaroslavl. Situated at the confluence of the Volga and Kotorosl Rivers the historic city of Yaroslavl is renowned for its numerous 16th and 17th-century monasteries and churches. We pay a visit to the Monastery of Transfiguration, the Church of Elijah the Prophet and see the Belfry Tower of the Spaso-Preobrazhensky Monastery. From Yaroslavl we drive towards Pereslavl making a stop to visit to the Monastery of St. Jacob the Savior at the shores of Lake Nero, just outside Rostov Veliky. In late afternoon we reach Pereslavl-Zalessky. Check in at Hotel Azimut Pereslavl****.

Pereslavl-Zalessky at the oval-shaped Lake Plescheevo is famous as the birthplace of Russian hero Aleksandr Nevsky. The pictoresque town has no less the six monasteries and we vist the oldest of them, the Nikitsky Monastery in the morning. We continue to quaint town of Sergiev Posad, where we visit the Trinity Lavra of St. Sergius, the most important Russian monastery and the spiritual heart of the Russian Orthodox Church. The whole Lavra was beautifully restored for the 700-years celebrations of the birth of St. Sergius of Redonezh. In the late afternoon we arrive to Moscow and check in at Hotel Azimut Smolenskaya**** or similar.

Moscow, The Mother of Russia, is a genuine Russian city with the Kremlin and its onion domed cathedrals. The dramatic changes over the last decade have made the city to one of the most dynamic metropolis in the world. The morning sightseeing tour includes the highlights of the vast city: The Red Square with St. Basil’s Cathedral, the Theatre Square with Bolshoi Theatre and Sparrow Hills with Moscow University and we visit the Kremlin grounds and one of the cathedrals. In the afternoon is offered an optional visit to the Moscow Metro including the historical stations on the Ring-Line and a guided stroll along the famous pedestrian Arbat Street.

Max. 16 guests in the group 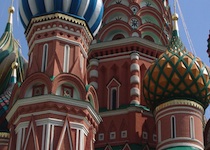 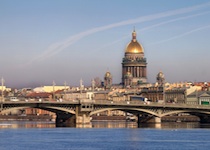 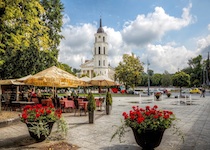